Wikipedia on my iPad Sucks!

What's not to love about the universal reference, all 3,952,630 pages kept up-to-date by an 85,000-strong army of contributors, who do it all for love, that's available online, from anywhere, including my iPad, even offline, thanks to the All of Wiki app that lets me carry the whole 4.73 Gbytes of it around with me whereever I go, so that if I, as an ignoramus Canuck, riding to work on the bus without a handy WiFi connection, get the hankering to know just who played Zaphod Beeblebrox in the original BBC radio broadcast of the Hitchhiker's Guide to the Galaxy, well, heck, I can just pop open All of Wiki and discover it was the aptly-named Mark Wing-Davey, who also played Zaphod in the TV series... in fact, with the addition of perhaps a towel, I would be perfectly equipped to face the Vogons with my Wikipedia-enabled iPad.

Besides, I don't think Vogon ships are equipped with 802.11n WiFi, so that's perfect.

The iPad is pretty much how I envisioned the Hitchhiker's Guide when I first read Douglas Adam's opus many years ago. So if I love Wikipedia so much, why do I say it sucks? Here's what the desktop version looks like on my iPad: 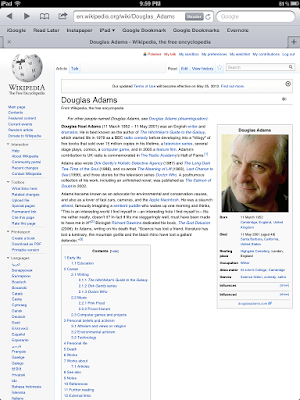 I don't know about you, but i find it hard to read 6-point type on an iPad. Granted it's a now-ancient iPad Mark I, but i don't think the whiz-bang Retina display would make much difference, it's still tiny type.

Let's try the two finger splits and zoom in: 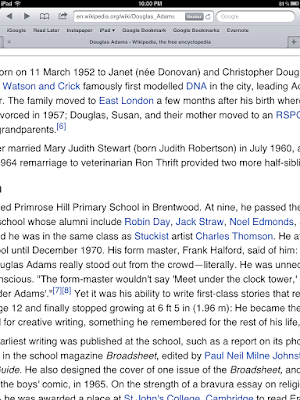 Terrific, the type's bigger now, but it didn't reflow to fit the screen. Okay, you say, switch to the mobile version: 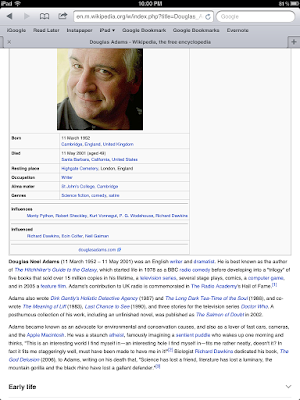 Big improvement, now I see tiny type one block at a time, and it still doesn't reflow when I zoom in.

C'mon, Wiki guys 'n gals, this is the Age of Mobile, I know you've heard about responsive web design (it's right here). Let a thousand screens bloom! You've recorded all that's vital to human knowledge, surely you can make it comfortable to read on my iPad, and Nokia N8, as well as my desktop?

Keep up the great work, though, we do love ya.
Posted by Philip Steiner at 10:29 PM