Posted by Philip Steiner at 5:17 PM No comments:

A properly formed Git commit subject line should always be able to complete the following sentence:

Posted by Philip Steiner at 2:36 PM No comments:

Further to my earlier post, I discovered 'aux' is not just a bad choice for folder names, it's bad for ANY file name on Windows!

Apparently back in the Dark Ages (1974 or so) when Bill Gates invented computers, the Interwebs and everything else digital, AUX, NUL, COM3, etc. were deemed names reserved for the OS, "magical files" if you will. That decision lives on through backward-compatibility (c'mon, 1974?! CP/M?! DOS?!?!?).

While working on my project, MS Visual Studio Code happily agreed to let me name a file"aux.yaml". Even though this ominous warning appeared, it let me continue once I appended "yaml" to the name:

Everything went fine until I tried to add the file to the project's working copy in Subversion. For some reason, no matter how many times I pressed "Add..." in TortoiseSVN, the file refused to appear in the commit list, and failed to adopt its stroppy little blue plus sign in Windows Explorer.

Hmm, let's open it with Notepad++ to make sure the file is OK - nope, Notepad++ complained bitterly about the file when I tried to open it: 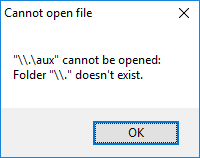 So at this point I figure the file was somehow corrupted by my attempts to add it or move it around in the Subversion working copy, let's just nuke it and start over: 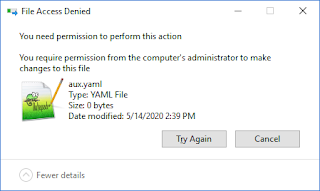 OK this is definitely weird.

A few minutes googling produced the answer: open an admin command prompt and delete or rename the file. The command ren \\.\C:\path\to\file\aux.yaml auxiliary.yaml put everything right again - TortoiseSVN happily added the file, Notepad++ opened it with nary a whimper, and Visual Studio Code - well, let's just say it has it's own opinion on file names.

How a 1974 bug still bites Win10 and Azure users
Posted by Philip Steiner at 2:48 PM No comments:

Windows complained, unjustly I thought, when I tried to name a folder 'aux'. Turns out this is one of a number of restricted MSDOS device files:

Posted by Philip Steiner at 11:34 AM No comments:

Remember the ol' shift-click in Windows Explorer trick to open a command prompt from a folder? 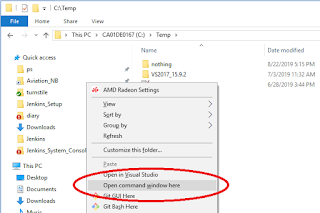 Windows 10 since version 1803 (?) helpfully offers to open a Powershell prompt instead: 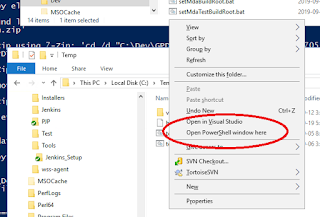 Which is great, if I want Powershell, which I don't. Apparently there's no way to revert or override this helpful 'feature', so I went around the side door - I shift-clicked to open Powershell, then typed "cmd" at the Powershell prompt, et voila, I get a good old command prompt in the folder:

Posted by Philip Steiner at 5:45 PM No comments:

Neil Armstrong's first step happened on my 10th Birthday! Or did it?

Did Neil Armstrong's historic first step on the moon land on my 10th birthday? Let's see. NASA published a detailed timeline of the Apollo 11 mission, and with a little help from date/time conversion websites, and a confirmation that California did indeed observe PDT in 1969, I constructed this timeline of the highlights:

I have a recollection of watching the landing on (black and white) TV, then looking out the window at the sky, thinking, "Wow, they are up there right now!". I don't recall if the Moon was visible during the day at that time.

Well, sadly, as I was living in Petaluma, California at the time, Neil's boot hit the moondust at 8:56 pm PDT on Sunday, July 20th, the day before my 10th birthday.

For a certain someone in Cape Town, however, it happened very early on her 10th birthday!
Posted by Philip Steiner at 12:28 PM No comments:

Perl - get the script path


Note that there is no trailing slash, and Windows back-slashes '\' are converted to forward slashes '/'
Posted by Philip Steiner at 5:47 PM No comments: