Somewhere in the heart of Reqpro, Smalltalk lives on. Got this notice when I quit:

Posted by Philip Steiner at 5:16 PM No comments:

Quote of the day

functionality is an asset, but code is a liability
- Ted Dziuba on Taco Bell Programming
Posted by Philip Steiner at 2:47 PM No comments:

I don't understand why most generic PC keyboards, you know the kind that plug into a USB port on your PC, lack on-board USB ports themselves. It would be so convenient for things like keyboard lights. Back in the day, my Mac keyboard had Apple Desktop Bus ports, so I could plug the mouse directly into the keyboard.
Posted by Philip Steiner at 11:56 AM No comments:

Compute length of a string in a batch file


Thanks to poster Secret_Doom on computing.net
Posted by Philip Steiner at 10:22 AM 2 comments:

How to fix "weird" characters in XML

I had been aggravated by an extraneous a-circumflex character (Â, Windows keymap Alt-0194, Unicode '\u, HTML character entity &Acirc;) preceding all the degree symbols in XML output from C++ code using MSXML. For historical reasons, the degree symbol is defined in code as a literal const std::string = "°", which is later added to an XML Document tree, then output using fout() function.
Here's an abridged sample:

[explain ISO-8859-1]. It appears that MSXML stores the character in the XML document as a two byte encoding. UTF-8 uses variable-width encoding, which means the ASCII character codes between 0 and 127 map directly to their hex values in UTF-8, e.g. the capital letter X, is 0x58 in both ASCII and UTF-8.

Mike Brown explains it this way:


Take, for example, the non-breaking space character, which in HTML we often write as "&nbsp;", a predefined (in HTML, not XML) entity reference defined as equivalent to "&#160;", which in turn is interpreted as the single non-breaking-space character. Different encoding schemes will represent this character as different bit sequences.

Now imagine you are the web browser, receiving an HTTP message containing an HTML document. All you see in the message is a stream of bits. How do you know what 11000010 10100000 means?

This was pretty much the same thing I was seeing. The XML processing instruction does not specify an encoding, so it defaults to ISO-8859-1. When MSXML renders the two byte degree character to single-byte ISO-8859-1, the first byte is saved as the Unicode lead unit 0xC2, followed by the single byte for the degree symbol, 0xB0. When the XML file is opened with a text editor (jEdit), the first byte is displayed as the a-circumflex, which happens to be 0xC2 in ISO-8859-1.

I fixed the problem by specifying the encoding in the XML processing instruction for MSXML:


It works equally well if the encoding is specified as ISO-8895-1. Now the XML declaration includes an explicit processing instruction for the encoding scheme, and MSXML renders the degree character as a single byte, 0xB0.
Posted by Philip Steiner at 1:28 PM No comments:

Suppose you're doing command line stuff in some ridiculously deep folder, e.g. C:\some path\to some\ridiculously deep\folder\way down\below a reasonable\level>, so the default command prompt pushes way over to the right edge of the screen, and any output containing the wraps 3 times in the window, and it's just really hard to read: 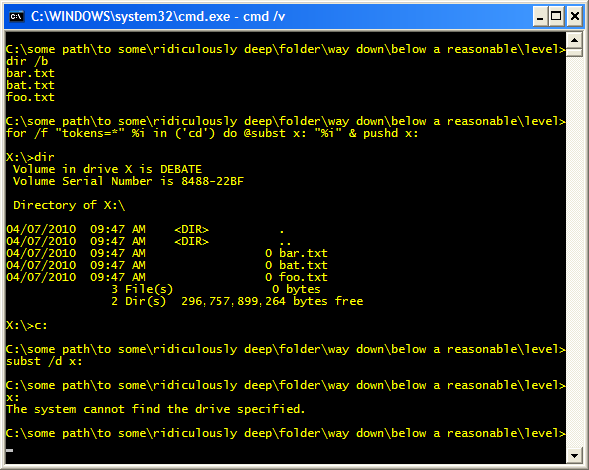 Delete the temporary drive with the command subst /d x:
Posted by Philip Steiner at 9:46 AM No comments:

Use the following technique to make character substitutions on the fly from DOS command results.

Given a file listing with underscores in the file names, e.g.

This is ugly, but it works. Start a new command shell with delayed variable expansion option cmd /v, then run the following one-liner, e.g. to replace the underscores with spaces:

The result will be:

The first trick, delayed variable expansion, is enabled by starting a new command shell with the /v option. This lets you set and change a variable's value at runtime by surrounding the variable with bangs ! instead of percents %. Normally, the default no immediate variable expansion would not update the x variable each time dir /b returns a line. Only the last value set to x is echoed each time:


The second trick, character substitution, is set by !x:_= !.

You can substitute other characters, e.g. !x:abc=def! would turn abcxyz.txt into defxyz.txt
Posted by Philip Steiner at 1:56 PM No comments:

The Metric Law of 90s

Thanks to Bruce F. Webster, who reminded me of this hoary old saying:

Note (15 April 2010) - discovered this is also known as the Ninety-ninety Rule
Posted by Philip Steiner at 4:23 PM No comments:

This notion puzzled me for some time: Have you got X years' experience [cooking, programming computers, running a business], or one year, repeated X times?


Simply, have you grown? Are you doing something new this year, something you couldn't have comprehended X years ago? Did you acquire a new skill, learn a new point of view, make a new friend, visit a new place?

If not, you're on the hamster wheel. Time to bail out.
Posted by Philip Steiner at 10:19 PM No comments:

How to run SQL*Plus one liners on Windows

Suppose you have a simple one line query to run on your Oracle database. Oddly, SQL*Plus doesn't take SQL statements as a command line parameter.

For a simple one liner, it's often too much work to start up sqlplus, logon, type in the SQL statement, then exit. It may also be too trivial to save the SQL statement to a file that you then call from sqlplus, e.g. C:\>sqlplus user/pass @myfile.sql.

To do it all in one line on the command prompt, echo the statement into sqlplus:

This technique would probably also work on a Unix box, but I don't have an Oracle db installed on a Unix box to test it out.
Posted by Philip Steiner at 7:25 AM 1 comment: